US may sign Taliban deal with violence reduction, but it wouldn't help Afghans: VP Danish

The United States may get prepared to sign deal with the Taliban with reduction in violence, but it wouldn't solve anything for the Afghan people, Afghanistan's Second Vice President Sarwar Danish said on Sunday. 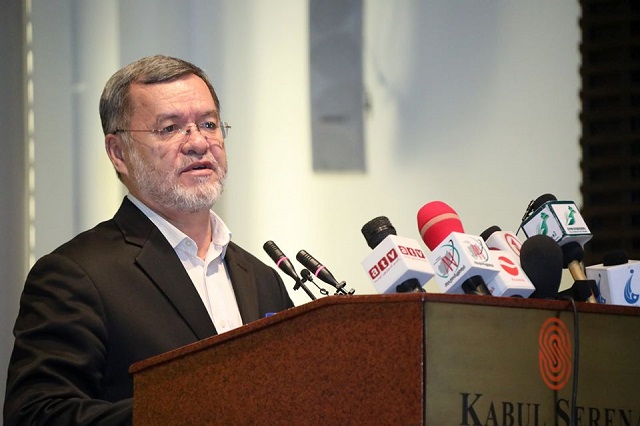 Violence reduction plan is an ambiguous plan and it is a kind of escape from peace and cheating of people and the international community,” Danish said at a ceremony for launch of Afghanistan Human Rights Defenders Protection Strategy.
“It is possible that with such justifications by the Taliban and their supporters, the US will be prepared to sign the agreement, but it won’t solve any problem for the Afghan people who are the main party to the issue,” he said.
He said that unless intra-Afghan negotiations begin and unless there is a ceasefire, there would be no trust between the parties and there would be no hope for the future.
Danish said that signing of a peace deal between the US and the Taliban would be positive move, but the Afghan government and people, civil society organizations, political parties and ethnic groups have been sidelined.
He said that any peace agreement should ensure gaining power through democratic mechanisms as well as ensure human rights.
“Agreement on emirate system or on any other system that would bring dictatorship and violate human rights would not only fail to bring peace, but it would intensify war in Afghanistan under another name and title,” Danish warned.
Tags:
US may sign Taliban deal with violence reduction, but it wouldn't help Afghans: VP Danish
Source : Afghan Voice Agency(AVA)
Sunday 19 January 2020 16:01
Story Code: 201171 Copy text available
No justifiable reason to form interim government in Afghanistan: VP Danish
Literacy Is Foundation for Peace, Development in Afghanistan: VP Danish
Pervasive corruption hindering access to information: VP Danish
Afghanistan to Join Media Freedom Coalition: VP Danish
Featured news
Afghan peace plan: Kandahar's war-weary residents want the violence to end
After peace agreement, US still faces risks in Afghanistan
'Just leave': Afghanistan withdrawal is no-brainer, but 'deep state' controls US foreign policy, says ex-Virginia lawmaker
Pakistan to hold national dialogue on Afghan peace
Amnesty International Voices Concern Over Referral of 40 People to Afghanistan AGO
Militants' attacks registered amid observing "reduction in violence" in Afghanistan
1
Afghan peace treaty signed in the presence of Pakistan: Shah Mehmood
2
Iran urges U.S. to withdraw troops from Afghanistan after peace deal announced: Newsweek
3
New York Times slammed for publishing Taliban leader op-ed
4
First-ever Afghan Freight Train Leaves Karachi for Kandahar
5
Afghan forces convoy attacked in Kandahar
6
Significant Drop in Taliban Attacks in Early Hours of RiV: Defense Minister
7
Clashes reported on first day of Afghan truce
8
President Ghani Tasked Commission for Holding Inauguration ceremony
9
China Has Done Tremendous Job in Containing the Virus: Afghan Amb.
10
Civilians celebrate as partial truce mostly holds in Afghanistan