Zarif criticizes Google for ‘glitch’ in translation of condolences to Lebanese

Iranian Foreign Minister Mohammad Javad Zarif has criticized Google for mistranslating “condolences” to “congratulations” when Persian speakers want to translate their expressions of sympathy with the Lebanese people over a devastating explosion in Beirut. 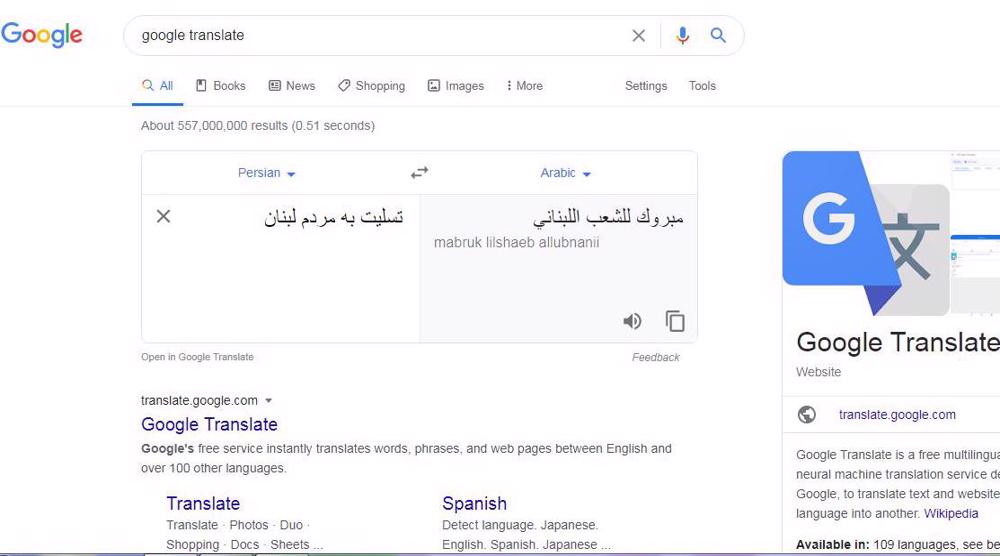 In a tweet on Wednesday, Zarif snapped at Google over a “technical glitch” that occurs when translating condolences from Persian to Arabic or English.
Zarif retweeted a video showing Google Translate turning the phrase “condolences to the Lebanese people” in Persian into “congratulations” in Arabic and in English, while the translation is accurate when someone wants to write “condolences to the Israeli/American people.”
“When Persian speakers want to express their condolences to the Lebanese in Arabic or English, Google translates it as ‘congratulations,’” Zarif wrote in his Twitter account.
“Yet there is no such ‘technical glitch’ if one wishes to condole Israel or the US,” he tweeted. “What gives @Google?”
Google, however, fixed the Persian-to-English translation following Zarif's tweet.
The Tuesday explosion, the biggest to ever hit the Middle East, has killed at least 135 people and injured about 5,000 others, with the figures expected to rise. Dozens are still unaccounted for.
The blast, which took place in port warehouses that stored highly explosive material near central Beirut, was felt as far away as Cyprus, leveling the whole port and large section of central Beirut and turning successive apartment blocks into masses of debris and twisted metal.
Some 300,000 people have also been displaced from their homes.
Lebanon has announced three days of national mourning for the victims of the deadly incident and declared a state of emergency across the country for two weeks.
The country has pledged a transparent investigation into the incident.
Tags:
Google for ‘glitch’ in translation of condolences to Lebanese
Source : Afghan Voice Agency(AVA)
Thursday 6 August 2020 12:27
Story Code: 216218 Copy text available
Featured news
Afghanistan: 15 of 279 Cases Test Positive for COVID-19
Blast in Daikundi Kills 14 Civilians: Interior Ministry
World Bank Gives $100M To Spur Economic Recovery
Cabinet Approves Reopening Of Schools From Next Week
3 Security Personnel Killed In Taliban Attacks In Faryab
3 Killed after Rocket Hit Residence in Ghazni
1
Afghan, Pak Officials Discuss Abdullah’s Upcoming Pakistan Trip
2
Political Deputy spoke at the Ministerial Meeting of Foreign Ministers of Landlocked Developing Countries on the sidelines of #UNGA