Afghan negotiating team is expected to travel to Doha on Wednesday for talks with the Taliban which will begin on Sunday, a source told 1TV. 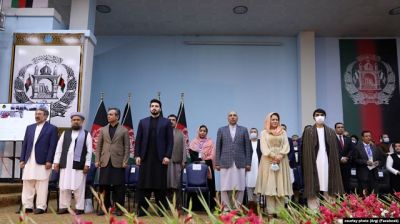 Meanwhile, a source told 1TV that President Ashraf Ghani would sign the decree to release 400 “hard-core” Taliban prisoners late on Monday.
The Taliban have said that they would sit for talks within a week once their prisoners are released.
Under the US-Taliban deal signed in February, intra-Afghan talks were expected to begin on March 10. However, dispute over release of Taliban prisoners as a precondition delayed the talks.
The Afghan government freed 4,600 out of 5,000 Taliban prisoners the group were demanding and it convened a grand assembly, known as Loya Jirga, over the fate of 400 “hard-core” Taliban prisoners, which approved their release.
Tags:
Afghan negotiating team to leave for Doha Wednesday, talks to begin Sunday
Source : Afghan Voce Agency(AVA)
Monday 10 August 2020 16:43
Story Code: 216470 Copy text available
Featured news
Abdullah Meets Pakistani President, Discusses Afghan Peace
Telephone Call between Foreign Ministers of Afghanistan and Canada
Sima Samar: Taliban Should Agree To A Ceasefire
Kuwait Swears In Sheikh Nawaf as New Emir
Indo-Afghan Youth Forum Created For Fostering Bilateral Ties With India
President Alvi: Pakistan Suffers From War In Afghanistan, Benefits From Peace
1
Political Deputy spoke at the Ministerial Meeting of Foreign Ministers of Landlocked Developing Countries on the sidelines of #UNGA