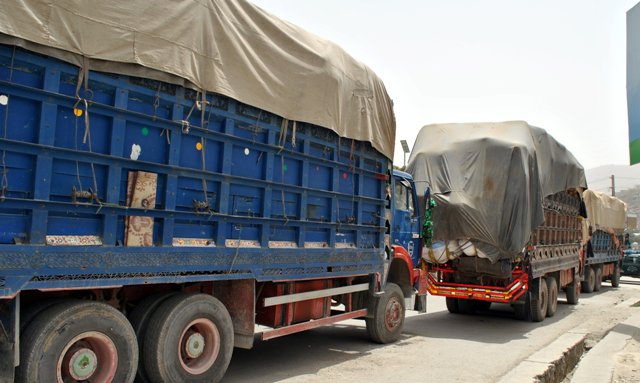 AVA- The main export items of the country included carpets, precious stones, saffron, fresh and dried fruit, vegetables natural plants and handicrafts, but the real statistics for the exports are unknown.

An investigative report by Pajhwok Afghan News published in 2014 showed that the private sector shows the actual value of the exporting goods 79 percent less in order to evade tax.

Based on the report, the Afghan government lost billions of afghanis from the exportation of the mentioned items as result of tax evasion during the last four years.

However, no action is so far taken to resolve this problem despite the 2014 Pajhwok report was based on clear evidences.

According to the Ministry of Commerce and Industry (MoCI), the Afghanistan imported items worth $6.6 billion and exported goods worth $720 million in 2017.

However, a credible source said that the statistics obtained from exporting countries showed Afghanistan exported goods worth of around $1.2 billion.

These statistics show that exporting goods are undervalued by 40 percent lower than the original price.

However, deputy head of Afghanistan Chamber of Commerce and Industry (ACCI) department, Khan Jan Alkozai said: “In fact our exports are estimated at $1 billion in last fiscal year. But the statistics we know shows that our exports are worth $720 compared less than $600 million in previous years.’

Considering to the statistics given and Pajhwok report in 2014, the exporting goods are on average undervalued by 55 percent over the last 12 years.

In response to a question about why the traders unwilling to disclose the real value of goods, Alokozai said, “Unfortunately the main problem is in the system; our system is very complex, vulnerable and corrupt.”

The traders could not submit their balance for six months or a year because they are asked to pay bribe and harassed, therefore they were forced to undervalue the goods, he said.

He said that the problem would not be resolved if corruption not eliminated in customs and the administration system and tax balance dues not simplified.

Considering to the statistics provided by Zadran and ACCI, the government could collect around 300 million in revenue from exports last year if the goods were not undervalued.

Without going into details, Zadran said that collection of 148 million afghanis was less because the government exempted taxes on some goods over the last three years and exporters paid only 20 percent of clear tax.

The ACCI and Export Promotion Agency (EPA) had previously suggested that tax on exports should reduce by at least 50 percent for prevention of wrong statistics.

They said that the government should end corruption in customs and simplify administration processes.

Zadran confirmed the goods undervalue issue and corruption in the country customs and said the MoF had tried for resolving the problem in the last three years.

He said that tax exemption on some goods, simplification of administrative processes, installing electronic systems in customs, employing professional figures and implementation of punish and award program were efforts for reforms in the customs over the last three years.

The MoF works on a plan to know the real value of exporting and importing goods by connecting with other customs online, he said.

Zadran stressed on combating corruption and said the phenomenon was existed in all government organs for years and its complete elimination needed efforts and time.

However, Taj Mohammad Akbar, an economy lecturer in Kabul University, believe that no steps have taken for fighting corruption, particularly in the country customs.

The tax evasion issue is ongoing from long years and the reason behind it is the connection of some traders with government officials, he said.