Gov’t to respond to the recommendations, needs of the armed forces: Ghani

President Mohammad Ashraf Ghani has vowed that the government would respond to the recommendations and needs of the armed forces. 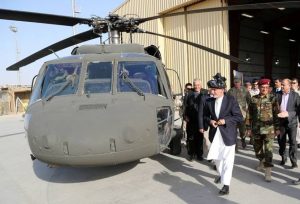 The Office of the President, ARG Palace, in a statement said President Ghani made the remarks during a video teleconference meeting with the civilian and military officials of Balkh, Faryab, Frah, and Kunduz.
The statement further added that President Ghani heard the reports and recommendations of the civilian and military officials of the named provinces.
He said necessary steps would be taken regarding the recommendations of the civilian and military officials after a decision has been taken during the upcoming meetings of the Commander-in-Chief of the Armed Forces.
President Ghani also talked over the phone with the commanders of the various army corps, the 20th division, and the Special Operations Corps, ARG Palace said, adding that the military commanders shared their report regarding the security arrangements for the elections, fight against the militants.
The statement by ARG Palace also added that the military commanders also shared information regarding the existing barriers on the way of the operations of the armed forces.
President Ghani thanked the armed forces for their efforts in ensuring peace and stability and suppressing the militants and vowed that the government would respond to the recommendations and needs of the armed forces, ARG Palace said.
Tags:
Gov’t to respond to the recommendations, needs of the armed forces: Ghani
Source : Afghan Voice Agency(AVA)
Wednesday 12 September 2018 15:50
Story Code: 170603 Copy text available
No place for power mongers, irresponsible armed individuals anymore: Ghani
Ismail Khan backs parliamentary system, Coalition for Salvation of Afghanistan
Irresponsible armed individuals not to be tolerated, says President Ghani
Gov’t Welcomes India, China’s Plan of Joint Economic Project in Afghanistan
Defense forces capabilities to be further bolsters in next two years: Ghani
Featured news
Intra-Afghan Talks to Begin on August 16 in Doha: State TV
Polio vaccination campaigns resume in Afghanistan after coronavirus pause
180 Afghan Sikhs and Hindus Headed for India
Afghanistan-Pakistan Transit Trade to Normalize in a Week: Imran Khan
Schools to Reopen in Afghanistan on Aug 22: Gov’t
Ten Taliban Insurgents Killed in Kunduz
1
Loya Jirga decides that 400 hard-core Taliban prisoners should be released
2
Zarif criticizes Google for ‘glitch’ in translation of condolences to Lebanese
3
9 members of a single family wounded in Taliban mortar attack in East of Afghanistan
4
U.S. plans to withdraw more than 4,000 troops from Afghanistan by end of November
5
US to cut troop levels in Afghanistan
6
Nabil: Pakistan Is Never Trustworthy
7
Terrorists trained by Pakistani commandos in Afghanistan planning attacks in Kashmir: Report
8
Pakistan steadfast for inclusive Afghan settlement: FM
9
Taliban expresses readiness to hold peace talks with Afghan govt
10
Khalilzad Expects Prisoners' Release in 'Next Few Days'