Horticulturalists in the country’s southern Helmand province hope to produce more than 24,000 tons of pomegranates this year, the official Bakhtar News Agency (BNA) reported the other day. 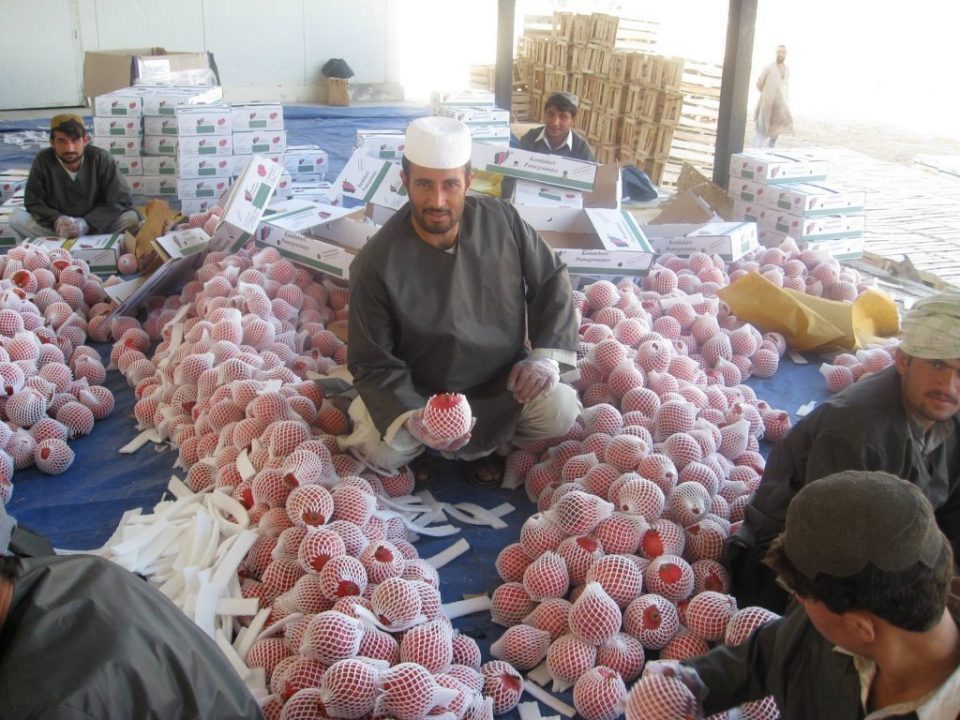 “Farmers in the province would collect 24,460 tons of pomegranates this year 24,460 tons compared to 20,000 tons last year,” Bakhtar News Agency – the only government owned online news source said.
The agency quoted agriculture officials as saying that the pomegranate was good in terms of quality and productivity.
Hundreds of various pomegranate orchards are being thrived in 1,105 acres of land in the province, where, according to the figure given by the provincial agriculture department, each hectare yields up to 21 tons of pomegranates, something unique in its kind across the country, according to the agency.
“Up to 17 kinds of pomegranates – with premature yielding as of their peculiarities – are produced in the province,” said the agency citing the local source.
The reason behind the expansion of the fresh fruits orchards and increase in their quantity, the agency said was modern awareness program, provided by the provincial agriculture office to the farmers in the province.
Tens of more pomegranate orchards are expected to be grown in up to 500 acres of lands hoping to increase the amount of produce to 30,000 tons next year.
Including Helmand, Afghanistan can be considered as a known country for its excellent quality pomegranate fruit commonly grown in Kandahar, Kapisa, Samangan, Farah, Nemruz and Balkh provinces.
The pomegranates are mostly exported to some neighboring and regional countries, including Pakistan, India and the United Arab Emirates.
Helmand, in Afghanistan’s southern zone, has been producing nearly half of opium poppy in 2018, but besides this, it has also seen a continuing investment to advance agricultural methods including solar panels for powering irrigation pumps and specific fertilizers and pesticides.
The country’s horticulturalists are expressing pleasure that their pomegranate produces were having good markets inside and outside the country.
Tags:
Helmand province Pomegranate
Source : خبرگزاری Herat Afghan Voice Agency(AVA)
Sunday 18 August 2019 00:26
Story Code: 190147 Copy text available
Air strikes kill a dozen Afghans, battle intensifies in Taliban strongholds
Airstrike kills 16 civilians in Southern Afghanistan
An Explosion reported in Helmand province/ Qahraman lost his life
How the Taliban Infiltrated the Most Vital Afghan Army Base — Again
6 of a family killed as mortar shell hits Helmand home
Featured news
Afghan forces convoy attacked in Kandahar
President Ghani Tasked Commission for Holding Inauguration ceremony
Afghan peace treaty signed in the presence of Pakistan: Shah Mehmood
Memorial monument for media martyrs in less than a month: Sharq
First-ever Afghan Freight Train Leaves Karachi for Kandahar
China Has Done Tremendous Job in Containing the Virus: Afghan Amb.
1
Two Afghan banks to open branches in Chabahar port
2
Joint Afghan-Iran Trade Expo Kicked Off in Kabul