As many as four civilians lost their lives and 11 others were injured in a suicide blast on the Kabul-Logar highway in eastern Afghanistan's Logar province on Thursday. 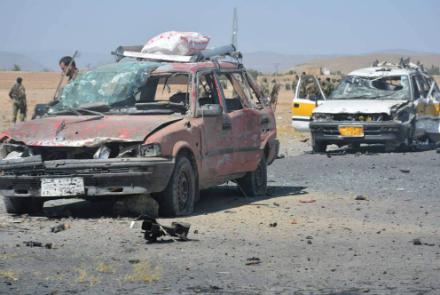 Quoting a statement from the provincial governor's media office, TOLOnews reported that the explosion took place in the afternoon and was intended for a convoy of the Afghan armed forces. However, the blast affected the civilians who were travelling on the highway.
No Army personnel suffered casualties during the attack while they were passing through the area, the statement said.
Four civilian vehicles were damaged in the suicide blast.
The attack came hours after a car suicide bombing in capital Kabul killed 10 people, including a US and a Romanian service member and left 42 others injured.
The incident took place at around 10:10 am (local time) near the National Directorate for Security (NDS) checkpoint in Kabul's Police District 9, according to the Afghan Interior Ministry.
The Taliban had claimed that the attack targetted a foreign forces convoy, which was entering an NDS facility in the heavily-guarded Shashdarak area, home to several important buildings including the headquarters of NATO-led forces in Afghanistan, the Afghan Defence Ministry and the CIA's Afghan station to name a few.
The latest attacks have come even as US envoy on Afghan peace reconciliation, Zalmay Khalilzad, has been meeting Afghan President Ashraf Ghani and briefing him on the agreement that was reached "in principle" with the Taliban following the completion of the ninth round of talks in Doha last month.
The agreement aims at ending the nearly two-decades-long civil war in Afghanistan.
The Afghan government was until now shut out of the negotiations as the Taliban calls it a "puppet" of the US.
Tags:
Afghan Government Zalmay Khalilzad Afghan armed forces Logar highway
Source : خبرگزاری Herat Afghan Voice Agency(AVA)
Friday 6 September 2019 01:43
Story Code: 191126 Copy text available
‘No One Survived.’ A Taliban Attack Kills 32 at Remote Afghan Post.
US envoy heads to UK as part of Afghan peace tour
Taliban Urged To Heed Past Mistakes In Afghan Peace Talks
Afghanistan peace talks in doubt after Taliban's abrupt walkout
US, Afghanistan Agree on Need for Intra-Afghan Dialogue With Taliban
Featured news
Top Pentagon Leaders Can’t Say If Any Secret Side Deals Are Part of The Afghanistan Peace Agreement
UNHCR Welcomes EU’s Humanitarian Aid of €21 Million for Afghan Refugees
Deadly roadside bomb rips through Taliban vehicle in Balkh province
Japan provides 3.8m USD for sustainable management of world heritage site in Bamyan
Kabulov to attend signing ceremony of US-Taliban deal
Iran cannot be ignored on Afghan issue: US expert
1
Afghan peace treaty signed in the presence of Pakistan: Shah Mehmood
2
Iran urges U.S. to withdraw troops from Afghanistan after peace deal announced: Newsweek
3
Significant Drop in Taliban Attacks in Early Hours of RiV: Defense Minister
4
Afghan forces convoy attacked in Kandahar
5
First-ever Afghan Freight Train Leaves Karachi for Kandahar
6
President Ghani Tasked Commission for Holding Inauguration ceremony
7
Clashes reported on first day of Afghan truce
8
China Has Done Tremendous Job in Containing the Virus: Afghan Amb.
9
Civilians celebrate as partial truce mostly holds in Afghanistan
10
Memorial monument for media martyrs in less than a month: Sharq