Iranians have held rallies in various cities to mark the 40th occupation anniversary of the former US embassy in Tehran, which gained notoriety as the "Den of Spies" after angry students occupied the compound and recovered thousands of documents proving Washington's espionage activities there. 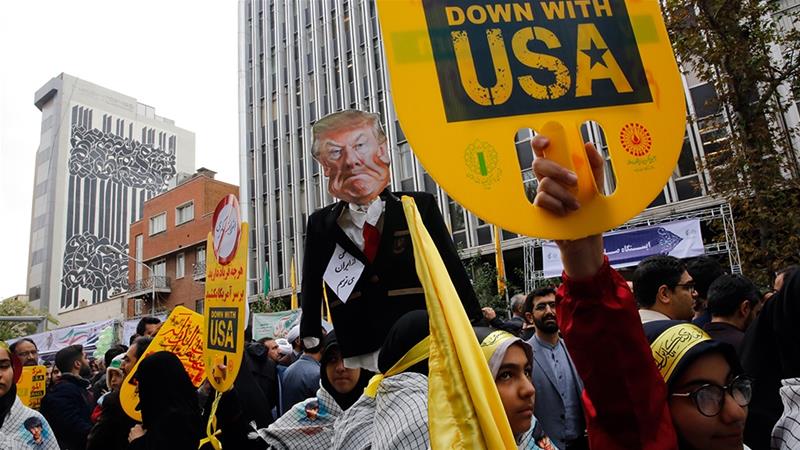 In the capital Tehran, students joined a large gathering staged outside the former embassy building from the early hours of morning to honor what is regarded as a milestone in Iran's ongoing fight against the world arrogance.
The demonstrators expressed their opposition to the global hegemony by chanting slogans against the United States and Israel and set their flags on fire in condemnation of their policies of creating havoc in other countries.
The embassy was taken over by hundreds of students on November 4, 1979, nearly nine months after the Islamic Revolution dethroned the US-backed Pahlavi regime.
The students detained 66 embassy staff who were in the process of destroying classified documents that would have incriminated them in plotting to topple the nascent Islamic Republic.
Iran released women, African Americans and as well as a man who was diagnosed with multiple sclerosis days later but kept the remaining 52 detainees for 444 days.
The event turned into a major political standoff between Tehran and Washington and brought then-US President Jimmy Carter under immense pressure to have the embassy staff released ahead of his re-election race in 1980.
Pushed for military action by National Security Adviser Zbigniew Brezinzski, Carter ordered Operation Eagle Claw, a clandestine military effort where US special forces were supposed to fly into Iran on board eight helicopters and take the detained embassy staff back into the US.
The operation began in April 1980, when the helicopters successfully entered Iranian territory and landed in central deserts near the city of Tabas before a planned flight to Tehran. From that point, however, the operation turned into a massive failure as a sand storm disabled two of the helicopters and a third one crashed into a transport aircraft the next morning.
Carter was forced to call off the disastrous operation and take responsibility for it in a public speech, which also greatly damaged his chances of re-election.
The saga finally ended after Iran agreed to release the detainees under a deal mediated by Algeria, through which the US undertook not to take hostile action against the Islamic Republic.
Through years, however, Washington has flaunted the agreement and done everything it could to harm Iran and topple the Islamic Republic.
On January 20, 1981, just as former US President Ronald Reagan gave his inauguration speech and celebrated his victory against Carter, the embassy staff were first flown from Iran to Algeria and then left the African country for Germany.
Den of Espionage
The former US diplomatic compound in Tehran has long been regarded as a clear indication of how deep America's intelligence operations run in other countries.
The students who took over the mission were able to piece together the shredded remains of various embassy documents that hinted at Washington's secret plots against Iran and the Islamic Revolution.
Founder of the Islamic Revolution Ayatollah Seyyed Ruhollah Khomeini hailed the move by the students, describing the embassy takeover as the "second revolution."
On Saturday, Iran celebrated the event by unveiling new murals on the walls of the embassy, which signified key aspects of the Islamic Revolution and Iran's resistance against US hegemony.
Standing out among the wall drawings is the painting of the Iran Air Flight 655, a passenger flight that was shot down by the USS Vincennes on July 3, 1988 as it was flying over the Persian Gulf with 290 people aboard.
Near the painting lies a minimalist drawing of a US Global Hawk stealth drone that was shot down on June 20, 2019 by Iran's Islamic Revolution Guards Corps (IRGC) immediately after it violated Iranian airspace over the Persian Gulf.