Thousands of Indian-Americans, along with representatives of civil rights institutions, have staged protest rallies in 30 US cities against the Indian government’s new citizenship law, which is largely believed to be anti-Muslim. 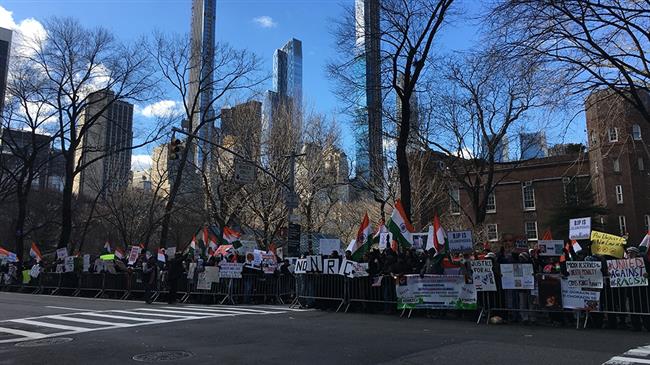 The massive protests took place across the US on Sunday, which was India’s Republic Day, and saw thousands of participants gathering mostly outside Indian diplomatic posts to condemn the new citizenship law.
Organized by the Coalition Against Genocide (CAG), consisting of some 40 US- and Canada-based organizations and private individuals, huge, emotion-charged crowds in New York marched on the Indian Consulate and shouted slogans against New-Delhi’s new citizenship law.
The so-called Citizenship Amendment Act (CAA), designed by India’s Hindu nationalist government, has triggered widespread protests across the South Asian country.
Waving hundreds of Indian flags, the protesters also raised banners with messages against India’s Prime Minister Narendra Modi, his Home Minister Amit Shah, the ruling Bharatiya Janata Party (BJP), and its ideological parent, the Rashtriya Swayamsevak Sangh (RSS).
They also shouted slogans against the Indian government’s right-wing policies.
The crowd went on to unfurl the Indian flag and sing the country’s national anthem to mark their Republic Day.
The protesters in New York demanded the repeal of the CAA in India, and called for action by the US government, including potential sanctions on India’s Home Minister Shah, as recommended by the US Commission on International Religious Freedom.
“What is happening in India is happening in the name of Hinduism. But the Hinduism that we practice is inclusive and has love at its center. Whereas the Hindu nationalism is exclusive by definition and seems to have hatred at its center,” said Sunita Viswanath, one of the speakers at the rally representing Hindus for Human Rights.
Speakers at the rally in New York also included Dr. Shaikh Ubaid, a founding member of CAG, who denounced the citizenship law as “unconstitutional” and called for its immediate withdrawal. Ubaid emphasized that the protests were not only happening across India but around the world, representing a global consensus against the “draconian” policies of Modi’s government.
Similar protest rallies were also held in Washington, DC, Chicago, San Francisco, and 26 other major American cities, where representatives of American Muslim, Sikh, Christian, and Jewish organizations as well as human rights bodies, including the influential “Black Lives Matter,” movement also participated.
The largest gathering of the protesters took place in the Midwest US city of Chicago, where Indian-Americans gathered in massive numbers and formed a several-mile-long human chain.