The most vivid personal memory of war is the first bombs dropping on Kandahar, said Naimatullah Zenrary. “The pressure of the blasts would prompt blood to shoot out of people’s eyes and noses,” he remembered. “The picture has been engraved in my head for almost two decades; the images still appear in my dreams.” 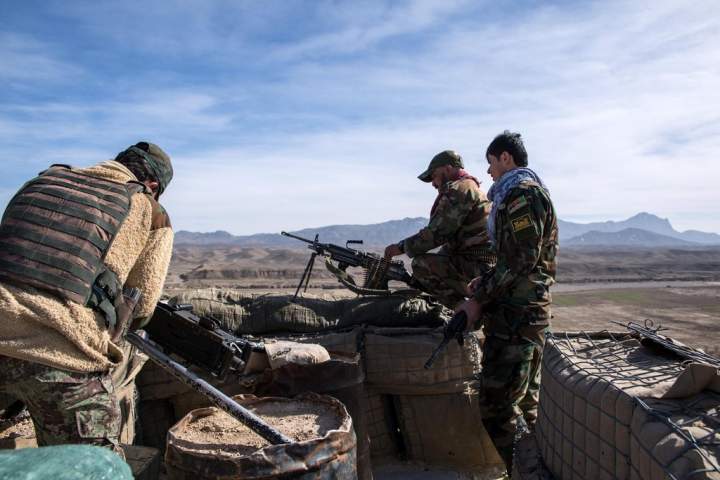 Shortly after the US launched its attack on Afghanistan in 2001, Naimatullah, then in his 20s, escaped and lived as a refugee in Pakistan for a few years. He only returned to join the Taliban. Today he lives in Kandahar’s Zhari district and is a commander in the militant group.
He’s been fighting for 16 years and has come close to death a number of times. “Still,” he said, “I’m ready to put my weapon down. I want an end to all this - every Afghan does. We all want peace.”
In October 2001, the US launched its first wave of attacks on Afghanistan, hitting Kandahar - a province of barren mountains and open steppe, and then the Taliban’s heartland - hard. Two months later, the militants surrendered, and the devastated province was captured.
US and ISAF soldiers have been station in Kandahar for almost two decades now, but fighting has continued, and the Taliban has managed to regain significant amounts of territory in the province.
Today, about half of the entire country is once again under Taliban control - and the Trump administration is seeking a way out of America’s longest war in history.
Naimatullah, now 42, is witnessing negotiations between the US and the Taliban, with a ‘reduction in violence’, which began last week, preceding plans for an official peace deal to be signed on February 29
Ahead of the deal, the country announced another five-year term in office for President Ashraf Ghani, after confirming election results that had been delayed since last September, mainly due to complaints of fraud, corruption and fake votes. But people in Kandahar have been through so much fighting that they are holding their breath.
“We’ve seen so much suffering,” said Bibi Shirin, a 42-year-old mother of seven who lost her right leg to the war 13 years ago in a mine explosion that also burned much of her body. She has a prosthetic leg, but the wound keeps bleeding every once in a while.
“Recently it’s been bad,” Bibi admitted. “I can barely sleep at night, the pain is so strong. We’ve been through the war but we don’t dare to hope yet. Inshallah, peace will come.” She takes off her prosthesis, exposing a stump dotted with blood. “We’re ready for peace,” she said, her four-year-old granddaughter sitting by her side.
Last year has been one of the deadliest in the conflict yet, with the United Nations announcing that over 100,000 civilians had been killed or injured since record keeping started ten years ago. In 2019 alone, The US dropped more than 7,000 bombs on Afghanistan as violence escalated. Since the start of the conflict in 2001, close to 50,000 civilians are estimated to have been killed.
On a frontline outpost in Kandahar’s Panjwayi district, Afghan National Army Commander Alef Odin, 48, also hopes that recent developments between the US and Taliban will bring peace. “We need the Taliban and our government to talk to each other,” he said, surrounded by his armed soldiers on the small post where ten of them live.
Alef has come from far away in Kapiza, a province near the country’s capital Kabul. It’s where his wife and three children are based and he misses them every day. “We’ve lost family and friends to the war on all sides of the conflict. We’ve seen schools and whole towns destroyed. I don’t want any of this for my children - I want them to live in peace and to be educated. The war has torn us all apart.”
Alef’s outpost is a cluster of brown mud houses, fenced off by a metal gate - barely enough security to fend off a major attack. Throughout the day, the soldiers patrol the area and surrounding villages on pick-up trucks, or keep watch on the base. “The Taliban is just over there in the next district,” Alef said, pointing to a nearby hill.
Alef explained that too many factors contribute to war in Afghanistan - including the opium trade, which is still the world’s largest, the neighbouring countries and other militant groups such as Al Qaeda and ISIS. “At least the Taliban and the US - and with it, the Afghan army - are ready to start reducing violence,” he said, a glimmer of hope in his tired voice.
“Of course, if our leaders tell us to stop fighting, we will,” said Taliban Commander Naimatullah. Our group has changed too. This is a new generation. We don’t want to put pressure on our people - the civilians - but we want the foreigners out.” He has killed people, but it's a topic he wasn't ready to speak about.
But even as the Taliban has developed, it has also split in different factions, and, if a deal is signed, an official at Afghanistan's spy agency, the National Directorate of Security, estimated that up to 10 percent of Taliban fighters could defect to other armed groups, such as the ISIS.
Adbul Ahad Afghan, the head of the Greater Kandahar Youth’s Development Organisation and a middleman between government and the Taliban who organises conferences and roundtables to bring both groups together, said that joint dialogue is important, but believes peace eventually sits with the Americans.
“If they want it, it will come,” he said. “This violence reduction is a symbolic step in the right direction. I think people within Afghanistan - the Taliban and people on the government’s side - will be able to reconcile.”
Both Alef and Naimatullah say they have family members “on the other side of the conflict,” but that family comes before political allegiance. “There is a lot of mistrust and pain, but I hope we can come together and end this war,” said the national army commander. “Afghanistan is a beautiful country, but it has been destroyed. We’re tired. We need peace more than ever.”