Afghan President Ashraf Ghani was on Thursday accused by his political rival Abdullah Abdullah of responding irresponsibly to the United States's cutting of aid by $1 billion due to their leadership feud. 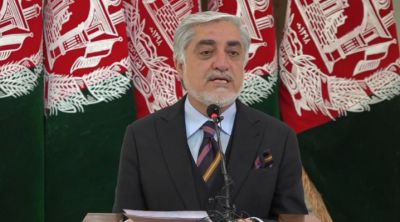 Earlier, Ghani had said that his government would fill the gap through other sources.
On Wednesday, he instructed authorities to reduce deadline of a plan to save $1 billion in security sector from three years to two years.
Abdullah suggested filling the gap through other sources was not realistic.
"It is an irresponsible behaviour toward people as the aid is for the people. It is not for one or two persons. Cutting the aid could affect health, education, infrastructure, energy sectors," Abdullah said at a press conference.
"This means - we will continue to our obstinacy and you will cut your aid, cut more if you wish to - and I don't see it as a responsible behaviour," Abdullah said.
Earlier, Ghani said that Abdullah was demanding an arrangement and a structure which was against the Constitution.
Abdullah, however, said that his demand was not against the Constitution and he had shown full flexibility to resolve the crisis.
He said that he was ready for further talks to resolve the crisis and called on national personalities to step in.
Tags:
Abdullah says Ghani's response to US aid cut 'irresponsible'
Source : Afghan Voice Agency(AVA)
Thursday 26 March 2020 15:55
Story Code: 206220 Copy text available
President Ghani vows to curb the activities of irresponsible armed individuals
Electoral Teams Should Stop Making “Irresponsible Comments”: Ghani’s Team
Ghani orders action against irresponsible armed individuals in Kunduz, Baghlan
No place for power mongers, irresponsible armed individuals anymore: Ghani
Policy, procedures to legalize irresponsible armed groups approved in principle
Featured news
Pakistan seeks hand over of Daesh head in Afghanistan
ISIS claims responsibility for rockets fired at US air base in Afghanistan
Afghan government releases another 100 Taliban prisoners after collapse of talks
150 Prisoners Released From Kabul Pul-e Charkhi Jail Due to COVID-19 Pandemic
MoPH Needs More Than 54 Million Liters of Disinfectant, 1 Million Protective Kits
About 20,000 Enter Afghanistan via Torkham Border
1
Taliban’s Attack on Almar District Leaves Six Killed, Wounded
2
Senior Taliban Leader Killed in Wardak Province
3
Taliban threaten more attacks if peace deal not honored
4
Explosion Targeted Prominent Taliban Leader in Quetta
5
Deal with US Has Been ‘Violated’: Taliban
6
Pakistan warns UN against human crisis developing in Afghan refugee camps due to COVID-19
7
Afghan president halts cabinet formation
8
Exclusive: Planned $1 billion U.S. aid cut would hit Afghan security force funds - sources
9
Airstrike destroys key Taliban compound in Balkh province
10
Peace deal with United States near breaking point: Taliban