The Ministry of Defense said on Monday the attack on Nangarhar Prison ended after nearly 20 hours, with the death of five attackers and the capture of three. 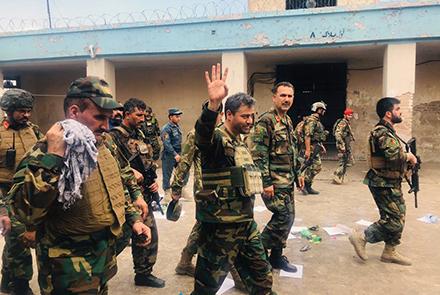 “The attack on Nangarhar prison has ended and the prison is now under the control of Afghan forces,” said Fawad Aman, deputy spokesman for the Defense Ministry.
According to Aman, the building next door to the prison--where the other attackers have holed up-- will also be cleared soon.
Nangarhar governor’s spokesman Attaullah Khogyani also confirmed that the Nangarhar prison attack has ended, with "at least 29 people killed and 50 wounded."
The Nangarhar prison attack ended after almost 18 hours, Khogyani said.
The attack began when a suicide bomber detonated a vehicle full of explosives at the entrance gate of the prison in PD4 of Jalalabad city at 6:44 pm on Sunday.
There are unconfirmed reports that Daesh has claimed responsibility.
The Taliban denies involvement in the attack.
The attack began on the last day of the Eid ceasefire between the Taliban and the Afghan government.
Source : Afghan Voice Agency(AVA)
Monday 3 August 2020 15:28
Story Code: 216017 Copy text available
Featured news
Rahmani Praises Top 3 Passers of National University Entrance Exam
Ghani: Customs Recruitments should be Independent
EU Envoys Stress On Urgent Need For Comprehensive Ceasefire In Afghanistan
Daudzai: Pakistan Showing They Are Serious About Support For The Peace Process
Afghanistan thanks Pakistan for facilitating Afghan peace process
COVID-19: 6 New Cases Reported From 224 Samples Tested
1
Afghan, Pak Officials Discuss Abdullah’s Upcoming Pakistan Trip
2
Political Deputy spoke at the Ministerial Meeting of Foreign Ministers of Landlocked Developing Countries on the sidelines of #UNGA