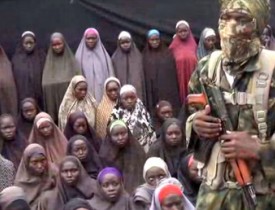 Terrorist group Boko Haram has freed 82 girls it captured in a raid on a Chibok boarding school in April 2014. Some 300 girl students were kidnapped, sparking global outrage and a  Nigeria has confirmed it swapped the girls for prisoners.

Afghan Voice Agency(AVA), The Nigerian government issued a statement on Sunday, confirming that 82 Chibok girls were freed by the West African Islamist group as result of  “lengthy negotiations” and “in exchange for some Boko Haram suspects held by the authorities.”

The operation involved efforts by a variety of national and international actors, including the Swiss government, the International Red Cross, the Nigerian military and security services, as well as local and foreign non-governmental organizations.

The girls will be personally welcomed in Nigeria’s capital, Abuja, by President Muhammadu Buhari on Sunday.

An anonymous government source earlier told CNN that 82 former captives were transported to the northeastern Nigerian town of Banki on the border with Cameroon. He said the girls are now set to undergo a series of medical checks before eventually being flown to Abuja to be reunited with their families after three long years of separation.

There was some confusion about the number of the freed girls, with different government sources providing slightly different accounts earlier in the day.