‘U.S.-Taliban Next Round of Talks to Be Held in Doha in Sep’

A member of Taliban group says the White House diplomacy efforts are proving successful, groundbreaking preliminary talks with the U.S. last month were “very helpful” and that another round will take place in Doha in September. 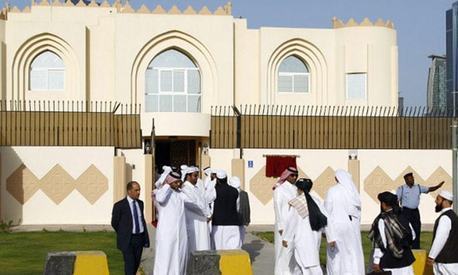 The Guardian newspaper has written that a senior member of the Taliban’s Quetta Shura told the newspaper that the first round of basic contacts “were very helpful” and “The next round will be more specific and focused on key issues.”
According to U.S. website the Daily Beast, the Taliban negotiators have shown willingness to compromise on the longstanding demand to evict all foreign troops before any negotiations with the Afghan government.
The report claimed that the Taliban could even countenance a remaining U.S. force in the country so long as it was involved in the political process that reached such an agreement.
In the meantime, Afghan political analysts say the peace talks should be accompanied by the preservation of Afghan values.
They stressed that Afghan government must be the main side of negotiations in these talks.
“We emphasize that the peace process should be led by Afghans and Afghan measures and principles should be considered in the process,” Chaman Shah Etimadi, a representative of Ghazni province at the Lower House added.
Four Taliban members met Alice Wells, a senior US state department official, at a hotel in the Qatari capital on 23 July for the first face-to-face talks in seven years.
Tags:
‘U.S.-Taliban Next Round of Talks to Be Held in Doha in Sep’
Source : Afghan Voice Agency(AVA)
Tuesday 14 August 2018 08:30
Story Code: 168850 Copy text available
‘Using Military Power against Me, Will Fragment Afghan Army’ – Noor Warns
40 Commandos ‘Under Siege’ In Faryab
President Ghani Calls Targeting Religious Scholars ‘Unforgivable’
Pakistan's new FM to visit Kabul, 'we have to start anew'
348 suspects arrested on various criminal charges in Kabul
Featured news
MoPH Says COVID-19 Cases Decreased By 40% As Tally Reaches 33,908
Reporters Without Borders Condemns Arrests, Harassment Of Journalists
Oil prices down with surprise rise in US crude stocks
Taliban: ‘Anti-Peace’ Circles Drawing Links To Uzbek Jihadist Group
12 Taliban insurgents killed in Paktia clashes
Dispute Over 592 Taliban Prisoners Solved: Source
1
‘Russian bounties’: payback or White House incompetence?
2
Taliban needs to end violence to help kick start intra-Afghan talks: NATO envoy
3
Russian diplomat says some members of US intelligence involved in Afghan drug trafficking
4
Each Afghan province will have a female deputy governor
5
Pakistan invites chief Afghan peace negotiator Abdullah
6
Iraqis rally to decry Saudi paper’s offensive cartoon of Ayatollah Sistani
7
Pak FM talks to Chinese Counterpart; Discusses Afghan Issues
8
Ghani appoints new governors for five provinces of Afghanistan
9
Telephone Conversation between the Acting Foreign Minister and the British Ambassador to Afghanistan
10
The Haqqani Network and the failing US-Taliban deal